Thomas Calder may be one of the most important men in French wine you've never heard of. He's an American export agent living in Paris who, like many brokers, is the forgotten link in the caravan of characters responsible for bringing wine from a vintner's cellar to our homes.

He has "discovered" (and he insists the word be wrapped in quotes) some of Champagne's brightest new stars like Cédric Bouchard (Infloresence and Roses de Jeanne), Dominique Moreau of Marie Courtin, Emmanuel Lassaigne of Champagne Jacques Lassaigne and Jérôme Prévost (La Closerie). Beyond Champagne, he represents Gerard Boulay in Sancerre, Vincent Paris in the Northern Rhône and Thomas Pico of Domaine Pattes Loup in Chablis, along with several others that make for a book that represents a new generation of classic French vignerons.

Calder has a penchant for choosing his words carefully, which may be the residue of his former life. Before he pursued a career in the wine business, he was a PhD student in English Literature at the University of Virginia. There he became interested in wine, after he and a friend vowed to assemble the "perfect liquor cabinet," then ran out of spirits to taste. He eventually took a job as a wine buyer at a gourmet shop there and decided that he'd rather work with wine than words.

"I realized since I knew how to read I didn't need to continue my English Literature degree," he joked. "Books aren't very expensive, and you can even get them for free at the library. You don't need to be in the business to read, but when it comes to grand cru Burgundy …"

Calder first came to Paris in 1996 to work under Peter Vezan, a broker who has also been an incredible influence on the French wines we drink in America. His expansive book of producers includes likes of Mugneret-Gibourg and Anne Gros in Burgundy, both François and Pascal Cotat in Sancerre, as well as Mas de Gourgonnier and Château de Pibarnon in Provence. But his name appears nowhere on the label. Like Calder, he's remained a phantom in the chain.

When Calder broke off to start his own brokerage, in 2002, the landscape had completely changed. Business was no longer done by fax or telephone. It was done by e-mail, and that, coupled with the advent of Google translator, had changed the game.

"Now it's easy for anybody to contact a grower," he said. "You can be sitting in Brooklyn and send an e-mail and become an importer."

Until recently, he ran his book of nearly 150 producers alone, exporting to more than a dozen importer clients in various U.S. markets. He doesn't have a blog, or a Twitter handle, or even a website. From personal experience, I can tell you that finding his e-mail address requires a bit of search-engine chicanery. But Calder isn't in it for fame or recognition.

"The chase, the pursuit, the discovery aspect is where the big thrill is for me," said Calder. "And then there's the courtship …"

He estimates he tastes more than 4,000 wines per year and ends up working with less than 2 percent of the domaines he encounters. From the perspective of just about anyone outside the wine industry, the thought of living in Paris and scouting new wine talent might seem like a dream, but his life isn't exactly the modern-day A Moveable Feast. Much of it is about digging a thousand holes throughout France, so to speak, before finding any treasure.

It took him three years to convince Champagne producer Jérôme Prévost to sell him wine. Part of bringing some of France's most talented, little-known producers into the spotlight requires trust and belief from both parties.

"When I met Cédric [Bouchard] and he announced the prices, they were high for someone no one had ever heard of, but he said, 'For my yields, this is what I need.' And I said, 'OK,'" said Calder. "But in the beginning people were like, 'Are you kidding me with these prices?' It required a lot of persistence."

Calder discovered Bouchard at a public tasting at Galleries Lafayette in Paris in 2005. Bouchard's wines, like Prévost's, are more in line with the Burgundian paradigm of single-vineyard, single-variety, single-vintage wines, from restricted yields, than they are with common practices in Champagne. To Bouchard's father, an old-school grower who sees Champagne as more of an industrial product, Cédric's ideas—and particularly his insistence on low yields—seemed nothing short of ridiculous.

But now that Cédric has become one of the fastest-rising stars in Champagne and one of the most in-demand among a small but very powerful group of buyers, his father, according to Calder, appears to be coming around.

Despite his influence, Calder may never receive the same amount of recognition as some of America's top importers, but he has the personal satisfaction of knowing he's had a hand in the success of the wines he believes in.

"One of the pleasures of what I do is helping people like Bouchard—maybe shepherding is a better word—into the limelight, so that they can get recognition for the work they're doing," he said.

What’s better than eggnog and bourbon or whiskey when the temperature has dropped to freezing, the kids are in bed, the Christmas tree lights are on and you and yours can quietly snuggle on the couch? This year do not buy that store made eggnog. It is highly processed, filled with preservatives and overloaded with refined sugar. This is a quick and simple recipe that should take no more than 15 minutes for homemade eggnog. And of course we recommend one of our favorite bourbons, Henry du Yore's Straight Bourbon. 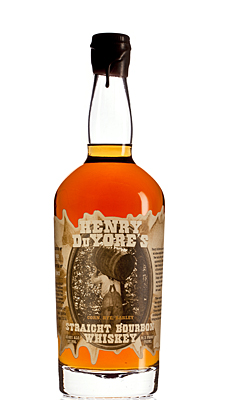 Start with the yolks and slowly whisk in 1/3 cup of sugar until the sugar has dissolved. Next add the milk, cream and nutmeg. In another bowl whisk the egg whites till you have soft peaks. Now add the 1T of evaporated cane sugar that you had put to the side and continue to whisk until you have stiff peaks. Chill the egg/milk/cream/nutmeg mixture and slowly whisk in the egg whites. Serve at your convenience once your eggnog is chilled. Add 1.5oz bourbon, or to taste, for the adult version.

December 04, 2012
Duval-Leroy: The Spirit of Independence

In 1991, Jean-Charles Duval-Leroy was dying from cancer. His wife, Carol, pledged to him that she would maintain his family’s Champagne house for their three sons. “It’s very difficult to stay independent,” says Carol Duval-Leroy. “Just a few [negociants] in Champagne now are family-owned.” Despite many offers over the years to sell the business, Duval-Leroy has upheld her promise, preserving the company for their children and building it into a successful mid-sized negociant that produces more than 5 million bottles of wine each year.

Based in Vertus, the house offers a range of non-vintage and vintage Champagnes, including a single-vineyard vintage bottling from the 9-acre Clos des Bouveries and a prestige vintage bottling called Femme. Femme’s distinctive bottle shape (featuring a wide base and narrow neck) and its Chardonnay-based blend were created by Jean-Charles prior to his death, but it was his wife who completed the project and gave Femme its name for the first vintage in 1990.

The name is a nod to Duval-Leroy’s role as head of the company, as well as to its chef de cave of 21 years, Sandrine Logette-Jardin, who believed that she and Duval-Leroy have put their stamp on the house. “The same feminine touch [is found] in the whole line,” she says. “It’s very streamlined and mineral-driven.”

Yet it’s not only a feminine touch that Logette-Hardin has imparted to Duval-Leroy’s Champagnes’; she’s also crafted wines that highlight a firm, racy backbone of acidity and are uniformly low in dosage, usually 6 grams per liter of residual sugar or lower (the brut category of Champagne allows a dosage of up to 15 grams per liter). “My logic for the dosage is to preserve the purity of the wine, not to mask it with sugar,” Logette-Jardin says.

This firm edge, however, doesn’t make the wines too austere. This is in part because Logette-Jardin employs malolactic fermentation, often 100 percent, for every wine. “Malo is systematically done at Duval-Leroy,” she explains, adding that it promotes a rounder, fuller mouthfeel in the wines.

Like any successful chef de cave, Logette-Jardin is a meticulous winemaker. “The more precise you start, the more precise you’ll end,” she says. Duval-Leroy has promoted this precision by investing in modern winemaking and storage facilities, including cement and stainless steel tanks in varying sizes, about 200 barrels for the wines that see oak, a new disgorgement machine and additional cellar space as of 2009. The company also received its ISO certification in 2002, adding its name to a worldwide roster of establishments that uphold regulated proprietary, industrial and commercial standards.

While these investments and high-production standards seem to indicate a company ready to springboard to growth and greater success, Ducal-Leroy points out that her house is still a little fish in a big pond. “Ninety percent of the market is taken by the big ones, so we take the little pieces of bread.” But that doesn’t’ mean that she’ll stop trying for a bigger slice. “If we want to improve [familiarity of] the brand, we know we have to be the best and make the best.”