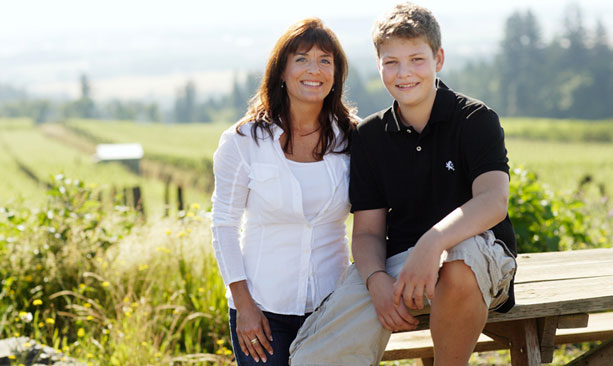 Jaine Brooks Heuck and her nephew Pascal Brooks look over the 18 acres of Brooks Wines vineyrads with Pinot Noir and Riesling grapes. Photography by John Valls.

Six years ago, Janie Brooks Heuck’s knowledge about wine varietals was minimal: some were red and some were white. It was her creative big brother, Jimi, who was the expert on vinification.

Janie, always the sensible sibling when the two were growing up in Southwest Portland, planned a lucrative career as a CPA. In her eyes, Jimi’s passionate involvement in the soil-to-sip process of making Oregon wine was mere dilettantism.

But when Jimi died suddenly in September of 2004 from an aortic aneurism at age 38, Janie soon discovered what an important figure her brother had become in the pantheon of Oregon winemakers.

From Dream to Reality
Growing up, Janie studied accounting while Jimi lived a bohemian life, traveling through France to learn all he could about life and wine. He was drawn back to McMinnville, where he’d attended college, to apply his bubbling knowledge to his beloved Oregon wine country. He roamed the hillside vineyards with his little boy, Pascal, dreaming out loud of someday building Brooks Winery.

Jimi’s organic, biodynamic grapes, grown on leased vineyards, were top grade. And his wines, made at friends’ wineries, were gaining national acclaim. So upon his sudden death, his friends didn’t want his valuable work to go down the drain.

A Collective Legacy
The day he passed, the grapes were just days away from harvest and 14 of his winemaker friends volunteered to bring in the harvest and make the wine. They knew Jimi’s meticulous process well enough to replicate his wines—but there was just one catch. “We want you to run the winery,” they told Janie.

Managing a winery did not figure into Janie’s ordered plan for her life. But her thoughts went straight to eight-year-old Pascal, who often stated he would grow up to be a winemaker just like his dad. Janie knew it was up to her to keep the winery going and one day pass it on to Pascal.

“He’s the last Brooks, but it’s my name too,” says Janie. “It is our family legacy.”

Pascal is now the teenage owner of Brooks Winery, with its own facilities and tasting room near Amity. Until Pascal takes over, a longtime friend of his dad’s oversees the wine production while Janie manages the winery.

And it seems Janie has a knack for the vintner’s life after all. The winery’s reputation was boosted last fall when a Brooks wine—a 2006 Ara Riesling— was served at President Obama’s first state dinner.

Just as Italy's vast and varied cuisine seems to have been boiled down to a few tired and true warhorses — spaghetti and meatballs, lasagna, cheese pizza — on the trip across the North Atlantic, so too has the choice of Italian wine often appeared to be limited to familiar reds such as Chianti or lambrusco. Italian whites rarely seem to figure in the popular imagination, and when they do, the pick always seems to be pinot grigio.

Time to break out of that same-old-same-old mold. Italy grows hundreds of wine grape varieties. Most of these whites offer a "simple but obvious combination of clean, unoaked styles that speak to the grape's distinctive personality," said Evan Goldstein, a California-based author and master sommelier.

Use this long Labor Day weekend and the light, intensely flavorful foods of late summer to explore all of what Goldstein and other wine pros say Italian whites have to offer. You're guaranteed to find something you'll like.

"Italy absolutely offers a wine for every palate," said Belinda Chang, beverage director for The Modern in New York City. "It makes sense that a country obsessed with food produces the perfect wine accompaniment as well."

Chang raised eyebrows some years back when she drafted Italian-only wine lists for two of the restaurants she worked for. She remains unapologetic today.

"Italy produces almost a quarter of the world's wine and is practically covered with vineyards. I really loved turning the drinker of chardonnay, white zinfandel and cabernet on to the incredibly food-friendly wines of Italy," she said. "All I needed to know was what their favorite wine was, and I could come up with an Italian equivalent in terms of flavor profile, body and texture."

Steven W. Alexander, sommelier for Chicago's Spiaggia restaurant, does much the same thing. Italy is a "Pandora's box of unknown varietals and flavors waiting to be discovered," he said. Wine drinkers who stick to pinot grigio or chardonnay are "missing out on a world of flavor opportunities and great values."

"The native grapes of Italy are some of the finest in the world and are worth exploring, especially if you are on a budget," he added. "In general, native varietals offer more value because they are marked up less than commodity grapes like chardonnay, pinot grigio and sauvignon blanc. Simply put, they are off the beaten path, so they command less of a mark-up at the winery."

Because September has arrived, which means full-bore oyster season, let's dwell for a moment on Muscadet, the Loire's minerally wonder wine. How such a neutral grape as Melon de Bourgogne can become an expression of site and depth is a tribute to the soils and determination of the farmers of the Nantais.

Oysterwise, there are plenty of other options, of course. Sauvignon Blanc has been a rising star, though when we recently considered diving into the realms of Sancerre and Pouilly-Fume as part of a larger Loire consideration, we realized that Sauvignon Blanc is, price-wise, in an odd place.

For Muscadet, 2009 is one of those wonder vintages, beautifully ripe, enough so to win over skeptics. Top producers made dramatic and age-worthy bottles in 2009, words not generally attached to a wine often destined for a simple carafe. So these remain some of the best values in wine. Enjoy as you seek out a long-awaited dose of sun.

2009 Michel Delhommeau Cuvee Harmonie Muscadet Sevre et Maine Sur Lie
Michel and Nathalie Delhommeau get this cuvee from a single parcel of older vines grown on lava-based rock. A lean, steely profile, with its leesiness showing at the end amid a burst of ripe guava. The mineral notes are chalky and salty, and there's an immediate refreshment to it. (Also try Michel Delhommeau 2009 Muscadet 'St. Vincent')

Article by Jon Bonné for SFGate.com

How do you win the Demolition Derby? Be the last driver whose car is still operational after ramming into vehicles and being rammed into by vehicles. Charles Smith, you are a brave soul! 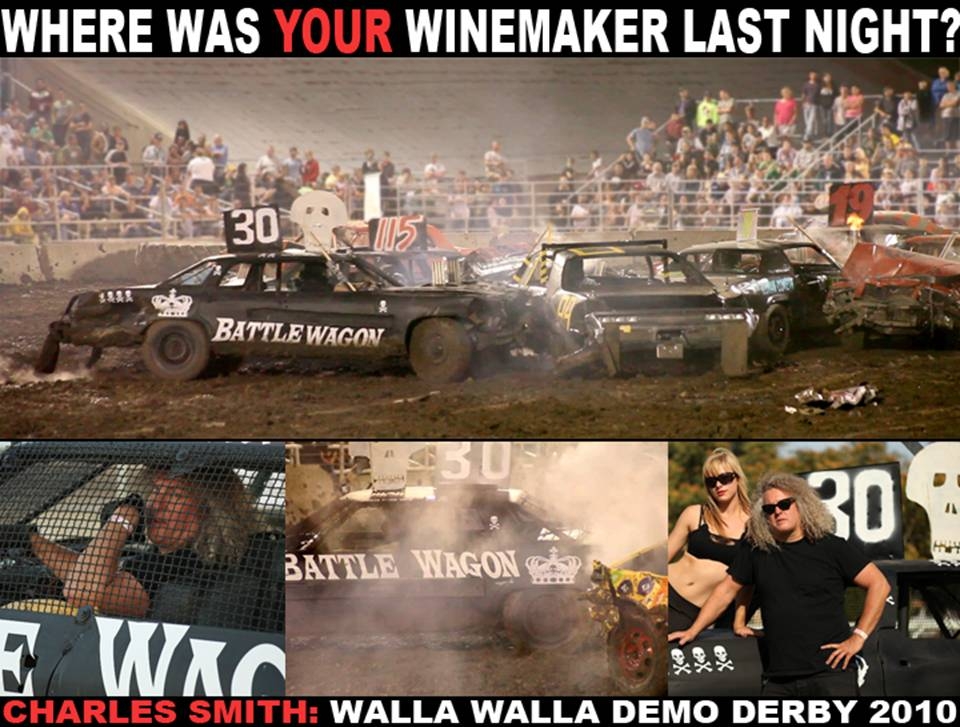